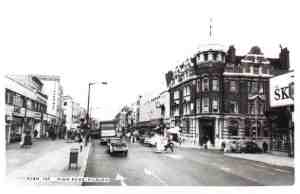 Tom Collins’ new film Kings is an adaptation of Jimmy Murphy’s Kings of the Kilburn High Road. I was intrigued by it for two reasons: a scene from the promo clip which shows one of the characters standing in a tube station in London declaring “see that? Irish people built that” (hair, back of neck, nationalist tendencies etc.) and I once happened to see an extract of Murphy’s play directed by Olabisi Adigun with five west African men in place of five Irish men. Apart from Adigun’s exciting reworking, something he is currently doing with Playboy of the Western World – clever man, I have little knowledge of Murphy’s play or Collins’ other work.

I did not get a repeat of the ‘hair of the back of the neck moment’ when I saw the film last night in Dublin’s Cineworld cinema (toilet’s hand dryer interrupting quiet moments). Nor did I think that the stylistic silences that Collins employs to convey memory and the characters’ guilt particularly useful. I do think however that to commit these ideas to a cinema screen rather than a stage is a very audacious attempt by Collins and his production team because it seems that it is now about right for stories of Irish migration experiences to be brought to a wider audience. This particular generation of men and women may well be the last of their kind. Sad stories of loss, guilt and memory are what Irish playwrights and other story tellers are good at and this film puts much of the substance of these themes on to the screen, mostly through the Irish language. (I feel that the poetry in Irish expression that is so often mistranslated into everyday English is one of the great losses of the last two hundred years or so.)

I came away from it thinking “oh no, not again, more miserablism and ochón mo chroí“. But it stayed with me later in the night with a few glasses of wine with my returned-emigrant brother and Ms 73man. The film, like the play, deals with our concepts of being home and not being at home, male insecurity at failure and leaving more than just a place behind. You won’t laugh much and the dialogue is sometimes a little languid but I would say see this important Irish film.

3 thoughts on “Review of Collins’ ‘Kings’”