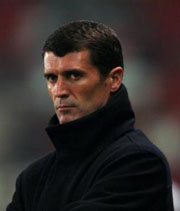 Firstly, here’s a gratuitous shot of Roy Keane following his team’s promotion at the weekend.

Is it just me or is everyone ignoring the fact that the mainstream media were caught seriously offside when Big Bertie went to the Big House in the Park yesterday morning? And boy does it hurt when you’re left out of the picture. This morning’s newspapers are full of hints at how sore the old lady of formerly D’Olier St and the inscrutable Irish Independent were to hear that Bertie had taken an early morning initiative and driven down the North Circular Road to the Phoenix Park. This is the way the Irish Times chose to editorialise this morning:

“What a shabby way to seek the dissolution of the 29th Dáil. Public notification of one of the most significant constitutional functions was conveyed, not to all Government Ministers, not even on the floor of the Dáil but by text message to the media in the half-light of a Sunday morning.”

Shame on comrade Ahern for not doing it the decent way – with propriety. It seems that the boys and girls of the Irish Times did not get a chance to finish up their Sunday morning lattes and gardening before they were pressed into action. As for the Independent it thought no better:

What? His phone was turned off and he was reticent you say? The boys and girls down at O’Reilly Towers seemed to have been smarting. As for RTE, they just couldn’t believe that the text message received from the FF election brain could have mis-spelled the word Taoiseach in the notification to them. Tsk tsk.

Meantime the shabby electioneering goes on in the form of an exceptionally upbeat and snivelling press release from the centre of ‘objective’ statistics, the CSO. See here for one of the most blatantly political releases in years.